select a station to open stream

Kanye West is sorry. About a lot of things that were said and done. ‘Ye took to Twitter on Wednesday morning (Sept. 5) to post an extended mea culpa to frenemy Drake about some perceived slights, some miscommunications and to just generally clear the air after a few months of bad blood and misunderstandings.

“Sending good energy and love to Drake and and crew,” West wrote along with a pic of Drake’s stage show on the current Aubrey and the Three Migos tour. “I haven’t seen the show in person but the images look incredible online. I understand where the confusion started.”

The olive branch came after a simmering summer in which the two men released their new albums, Ye and Scorpion, in the same month, and Pusha T questioned Drake’s lyrical abilities on “Infrared” from the West-produced album Daytona; Drake responded on the diss track “Duppy Freestyle” by calling out Kanye for not writing his own raps, which in turn led to Pusha’s searing “Story of Adidon,” which infamously revealed Drakes love bonus child.

Among the things Kanye apologized for — including “stepping on” Drake’s release date by dropping a series of G.O.O.D. Music albums ever by 888 Casino Friday in June — was not featuring the 6 God on the song “Lift Yourself” after the two had discussed recording it together and any confusion over whether he was the one who supplied Pusha with the information about Drizzy’s son. “There should have been no songs with my involvement that had any negative energy towards you,” Ye wrote, alluding to “Infrared” referencing Quentin Miller, the writer at the center of a Drake ghostwriting scandal in 2015.

Check out the tweets below. 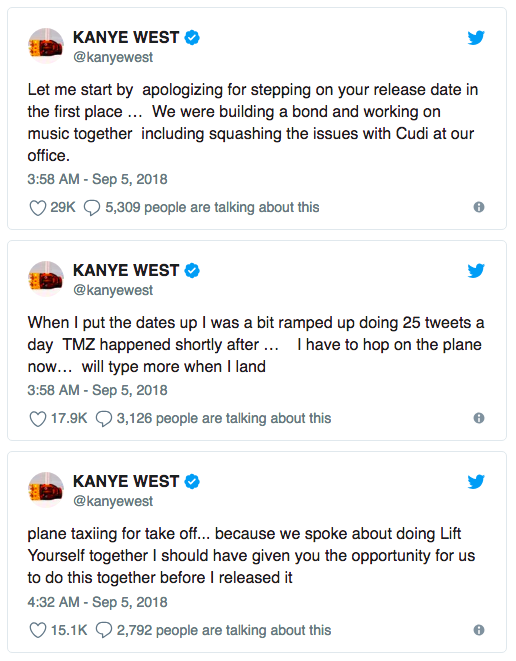